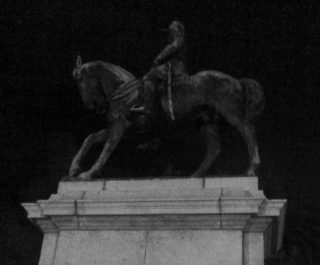 They thought I was there for their contemplation,
immortalised here quite near the station –
some once-sung hero of forgotten mettle,
like Raleigh’s cloak strewn for his queen:
a gesture, brash in its presumption,
hardly worth its coppery sheen.

They glance at me amidst their impatience
as they nod hello to a slight acquaintance
or pause and greet a passing friend.
In an idle moment with no distraction,
they’ll maybe read my stone inscription,
not necessarily to the end.
They drink the coffee they feel they deserve,
read their papers, frown and curse,
never once guessing the scarce-observed
is nonetheless their observer.

Hectic sun fades to mellow light,
embracing, gracing a tender sight:
burnishing the oaks and willows,
the hair of one whose head rests pillowed
dreaming in the beloved’s lap;
bag tossed at my feet, a careless cap.
Tentative beginnings with shy sweet smiles,
memorialised history
around the mystery
of their own beguiling lives.

Freezing winds round my frozen toes;
no lingering now for the masses of those
with collars up and hats pulled low,
depicted in tangerine rain-dropped glow.
Cars that honk when forced to slow
for commuters hurrying through the fall of rain,
enraged by the horn of their departing train.
No pause here for history’s voice,
the here, the now the only choice.

…except for those with no place to go,
who cower beneath the portico
of the one-time glorious park rotunda;
ruthless cold for those hunched under
cardboard clutched in chafing hands –
lair of junkies and down-and-outs,
where there is no music,
and life’s not grand.

They throw off the layers of winter’s skies,
Lean into the warmth and sigh,
coats shucked off but brolly nearby.
A moment to break that purposeful stride,
to subside a bit on my solid side:
to let the new-minted dawning day
speak its hope before going their way.
The moment is lost to those who won’t listen:
the buds will sprout and the fruit will glisten,
so take this moment while it’s new:
stand here with me, I’ve seen a few.