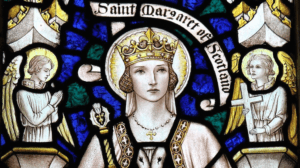 With modern Europe in the news due to their handling of the Covid 19 pandemic and vaccine distribution it is helpful to recall how Christianity came to forge the values the continent once held more closely. The stories below are from what is sometimes called The Dark Ages. [Article]

During a long-service break I had the privilege of spending two months travelling around Europe with my wife and son. As we did so, one of the significant highlights was learning about past Christian leaders who drew the troubled tribes of Europe together into cohesive peoples. It seems that from around 1000 to 1250 AD, there was a period when God blessed the continent with a number of exceptional, godly and wise leaders. These were vital in establishing the nation states of Europe.

I first began to see this in Budapest, Hungary when we visited the Dom Cathedral for concerts and afterwards discovered the preserved hand of Stephen I (975-1038 AD), the first King of Hungary who was later canonised as St. Stephen (in 1083). Stephen drew together the feuding tribes of the Carpathian basin—in part, by the winsomeness of his Christian mercy and wisdom. His compassion for the poor, his passion for objective justice and his concern for health and education were attractive to people. Stephen was a man of both compassion and action. He was a warrior, trader, diplomat and politician, who ruled what was nearly impossible to rule—but it was his trust in Christ which formed him as a leader, and which his contemporaries learned to revere.

In England we visited the tomb of Edward the Confessor (1003-1066 AD). Edward, as the second-last Anglo-Saxon King, was instrumental in bringing peace and unity to a people who were weak and divided, living in the shadow of powerful neighbours. He not only built the original Westminster Abbey, but also began work on the parliament buildings in order to provide a venue for competing local rulers to meet and work out their disagreements. Even though at the time he was crowned he was in a politically weak position, his reign was long (24 years) and extraordinarily peaceful.

As with Stephen, Edward’s popularity was enhanced by his compassion for the poor and his personal piety—even though he could also negotiate political alliances and military compromises with a frightening determination. The world seldom lacks determined leaders. But Edward was also a prayerful man who gave of his own wealth to care for the poor amongst his people. The world still needs leaders like that!

In Scotland we learned of Malcolm and Margaret. Margaret (1045- 1093 AD) was a relative of Edward the Confessor. She fled to Scotland in 1066 following the Norman conquest of England. The journey to the North in those days was quickest by boat and, the story goes, King Malcolm met her boat at the docks in Edinburgh and fell in love with her. Theirs is one of the great romances of Medieval history.

According to one historian, Malcolm was a barbaric, illiterate and harsh ruler whom Margaret taught to read and write. Under her influence, the Scottish Kingdom became a place of pilgrims, churches, monasteries and orphanages, a centre of education and health.

Once again, the effect of this generosity on the warring tribes was to draw them together under the leadership of the royal couple. I was surprised to learn that the memory of Margaret has been so revered in Scottish history that, even when Robert the Bruce (1274-1349 AD) was destroying the Scottish castles to prevent them from falling into the hands of his enemies, he ordered that the chapel of St. Margaret at Edinburgh castle should be left lest he provoke the anger of God against him. As a consequence, that tiny chapel is now the oldest structure of the fortress.

In Paris, we returned to Sainte Chapelle (Chapel of the King) to view the newly refurbished stained glass windows. This Chapel was built by Louis IX (1214-1270 AD) to house relics from the fourth century. Louis too was a unifying leader, who used both his military skill and works of mercy to persuade the Franks to give up their violent tribal rivalries. He introduced the legal principle that an accused is innocent until proven guilty—thus banning trial by ordeal. He established orphanages and places for treating the ill. He provided for the poor from his personal resources. Louis is also remembered for his involvement in two of the earliest crusades—which were then regarded as a necessary response to Islamic military expansion.

These leaders were not sentimental or idealistic; they had to engage in realpolitik; they made decisions that would not be approved of by some of our current western values or our political circumstances. But they had qualities that are still desperately needed. During our visit, we were made conscious of Europe’s contemporary political concerns, and it is clear the continent is again in need of unity if it is to avoid social and political turmoil.

Thus it was encouraging and humbling to learn about these strong but unashamedly pious Christian leaders from the past. They were neither of the left nor the right: they were wise enough not to trade in the simplifications that burden our political thought. But they knew their fallibility, and so they were unashamedly Christ’s people. They sought both his strength and his grace. They made an important difference then, and such leaders would also make a difference today.