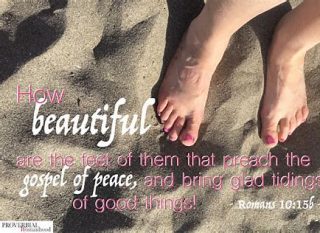 Feet are not generally considered pleasant.

Except for, of course, the impeccable crescent
of the perfectly pedicured nails on the toes
of the wearer who’s confident,
because she knows
that well-groomed feet and manicured hands
maintain well-heeled standards
and the upper-hand.

But the rest of us know that those petal-soft toes,
like the chubby dimples and button nose
of an infant,
give way to the filthy feet
of a child,
running wild
through her childhood street.
Racing through grass and digging in dirt,
rips in her trackies and snot on her shirt.
Feet soon gain blisters and splinters and cuts,
hangnails, black nails, and horrible warts
from the change rooms
at the annual school swimming sports.

And it’s downhill from there when it’s all said and done:
callouses, tinea, cracked heels, and corns;
and that dreaded blight that you’ve seen before:
your mother’s and grandmother’s poor sore big toe –
that unsightly bunion beginning to grow.

(So if you know someone with plantar fasciitis
and you have a leg joint that suffers arthritis,
be sure to swap stories for mutual support,
and pass on the details
of the orthotic you bought:
the range was extensive and such a good price,
and the staff were so helpful, and tactful, and nice.)

And you know you should really look after them better:
they carry the weight of your world, and they’re fettered
daytime and night-time in heels or in slippers,
gum boots and work boots and lace-ups and flippers.
And you always mean to take better care,
But they’re down at the end of your legs and neglected,
for nearer conditions that beg for attention.

But despite all of that they have their own beauty,
when harnessed for good in the cause and the duty
of spreading good news
to those who won’t hear
unless there are those
who will go where they’re told –
to tell of the fountain of water that’s living,
giving hope of salvation and grace in forgiving
the ailment much worse than those hurting our soles:
that affliction that’s fixed
by the curer of souls.

Forgiveness was bought by the blood of one pierced
whose feet walked the earth for so very few years,
but whose grace through the ages
has brought mercy near.
And it first was revealed to the women whose fear
left them trembling and wondering,
but hurrying to share
the incredible news that their Saviour was there –
beyond the tomb in which he’d been laid.
Although they were shaken and awfully afraid
they knew whom they saw and who called them by name:
and they fell down in worship
and clasped those scarred feet –
so beautifully wounded,
by death, to defeat…